Australian women have come a long way in recent history.

Women now make up close to half of the Australian workforce, and there is an increasing number of women becoming the main breadwinner of their family. In addition, more women than men are graduating from university.

And yet, women still face a number of obstacles from a financial and career perspective.

For starters, it’s no secret that women earn less than men. According to the Workplace Gender Equality Agency, Australian women take home, on average, $251.20 less than men each week, with the gender pay gap as wide as thirty per cent in some sectors in recent years.

Despite the increasing number of women in the workforce, the majority of part-time workers in Australia are women. Women spend almost three times as much time as men taking care of children every day, and account for sixty eight per cent of the primary carers for disabled people and the elderly.

In short, the growing pressure on women to ‘do it all’ has led to the emergence of the modern-day Wonder Woman.

Not only does she now have a career, she is still in charge of running the household and taking care of the kids. And on top of everything else, she is still held to old-fashioned standards about her appearance and her role in society, with women in the workplace facing criticism for trivial factors like a lack of makeup or high heels, or for prioritising their careers over motherhood.

With this year’s International Women’s Day campaign being all about collective individualism, we are reminded not to dismiss the impact our individual actions can have on bridging the gender gap.

So, if you are feeling disheartened and wondering how you as an individual can practically contribute toward the achievement of gender equality, here are 3 simple things that you can do, that will make a big difference.

One of the biggest challenges women face when it comes to financial equality is finding the time to prioritise money management. Why? Because while it is in our nature to be the carers and nurturers, we have also been socially conditioned to put child rearing and household chores above all else. Our instinct is to prioritise doing the laundry over researching our super, in a desperate bid to get through our never-ending to-do list.

Make a promise to yourself that, as of this moment, you will work on letting go of some of your mental load. If you are in a relationship, talk to your partner about sharing more of the domestic responsibility. If you have kids, then it’s time to get them involved too!

If your partner already helps you out when you ask, that’s a great starting point. However, this still means you are carrying the burden of having to remember what needs doing. It will take some time, but ultimately you want to reach the point where you no longer have to be the one who remembers what needs doing – others can equally share that responsibility.

If you are single, don’t be afraid to lean on friends and family for a helping hand, especially if you have kids. There is a reason why they say it takes a village to raise a child – you don’t have to do everything yourself.

Currently ninety-five per cent of primary parental leave (outside of the public sector) is taken by women. While the Workplace Gender Equality Agency has found that an increasing number of fathers want to be more hands on, there is a lack of policy and societal support to enable them to.

Clearly government and workplace policy need to evolve to catch up with modern times and recognise that fathers play an equally important role in raising children. Until this happens, it is down to the individual parents to pave the way for that change.

A simple step to take is to make the decision that both parents will work part time. In other words, instead of dad working 5 days a week and mum working 3 days a week, arranging for both mum and dad to work 4 days a week and alternate their days off. It is a small change that would have a significant impact. It will make it far easier for mum to maintain her career trajectory, and it allows the child quality time with each parent.

It is not uncommon for women to stay at home to look after the kids, especially when you consider the cost of childcare. A KPMG report found that for a couple earning the minimum wage, if the mother works more than three days a week, she is effectively working for just two dollars and fifty cents an hour on the additional days. Couple that with the fact that women tend to earn less than men and it is easy to see why, in so many families, it is the working mum who decides to stay at home. Mathematically, this makes more sense, at least in the short term. However, in among these discussions at home, the impact of lost super and career progression is often forgotten. Due to the power of compounding, the impact can be significant. Depending on the time spent out of the workforce, this can easily translate to hundreds of thousands of dollars in lost super.

To make sure that you are truly working together as a team, a simple solution here would be to arrange for contribution splitting in order to evenly divide the working spouse’s super between both super accounts (check whether your super fund allows it and if there are any fees involved).

This is an edited extract from Wonder Woman’s Guide to Money, available in paperback and Kindle format. Click here to order your copy today. 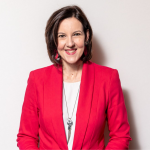 Natasha Janssens is a Certified Money Coach (CMC)® and founder of Women with Cents. She is an award winning finance expert with a passion for supporting women to transform their relationship with money. If you don't know what you don't know when it comes to money and financial matters, her book Wonder Woman's Guide to Money is for you. If you would like to work with Natasha, take the Money Type Quiz and book a quick get-to-know you call.

The information provided by Women with Cents is general in nature. It doesn’t take into account your objectives, personal financial situation or needs. Think of it as educational material that helps you make more-informed decisions. We recommend you obtain financial, tax and credit advice specific to your situation before making any investment or financial decisions.